Award-winning drama from director Tom Hooper telling the story of the relationship formed between King George VI (Colin Firth, in a Golden Globe and Oscar-winning performance) and his speech therapist Lionel Logue (Geoffrey Rush). After reluctantly acceding to the throne when his older brother Edward VIII (Guy Pearce) abdicates, George, or Bertie to his family and friends, is forced to act when his stutter leads to concerns about his leadership. Help is soon at hand, however, when he employs unconventional speech therapist Lionel Logue, who, using previously untried techniques, begins to bring about improvements in George's speech. As the relationship between the two begins to strengthen, the King's new found confidence grows, just in time for him to lead his country through its gravest hour. The film netted seven BAFTAs, including Outstanding British Film, and won a further four Academy Awards, including Best Film. 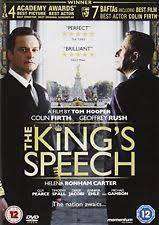 DVD
The Kings Speech DVD also appears in these Categories:

To Kill A Mockingbird DVD
Unknown