The Lost King, The Search for Richard III film tie in editon

On 22 August 1485, Richard III was killed at Bosworth Field, the last king of England to die in battle. His victorious opponent, Henry Tudor, went on to found one of our most famous ruling dynasties. Fifty years later, the kings grave was lost, its contents believed to be emptied into the river Soar and Richard IIIs reputation buried under a mound of Tudor propaganda.

Philippa Langley and Michael Jones trace the remarkable story of the search for the lost king, leading to the incredible moment when the 500-year-old mystery was solved as his remains were uncovered beneath a car park in Leicester. Featuring years of research on Richard IIIs fifteenth-century life and death, this is a compelling portrayal of one of our greatest archaeological discoveries that shines new light on historys most controversial monarch. 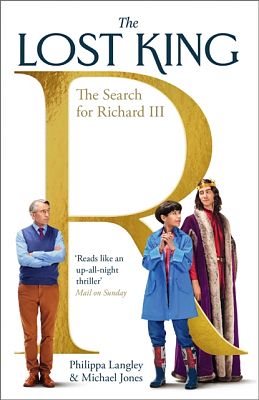 Paperback
The Lost King, The Search for Richard III film tie in editon also appears in these Categories:

9% off
Queens of the Age of Chivalry
Alison Weir
Trade Paperback
€16.99