The Oxford Book of Parodies

Parodies come in all shapes and sizes. There are broad parodies and subtle parodies, ingenious imitations and knockabout spoofs, scornful lampoons and affectionate pastiches. All these varieties, and many others, are represented in this stunning new anthology, which provides an unparalleled introduction to the parodist's art. The classics of the genre are all here, from Lewis Carroll to Max Beerbohm; but so are scores of lesser known but scarcely less gifted figures, and brilliant contemporaries such as Craig Brown and Wendy Cope. At every stage there are surprises. Chaucer celebrates Miss Joan Hunter Dunn, Proust visits Chelsea, Yeats re-writes 'Old King Cole', Harry Potter encounters Mick Jagger, a modernized Sermon on the Mount rubs shoulders with an obituary of Sherlock Holmes. The collection provides a hilarious running commentary on literary history, but it also looks beyond literature in the narrow sense to take in such things as advertisements, legal rituals, political warfare, and a scientific hoax. 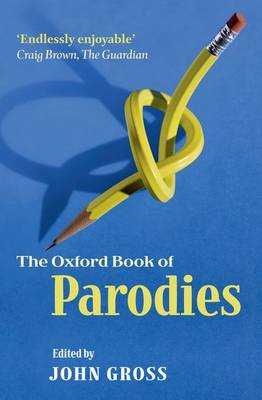 Paperback
The Oxford Book of Parodies also appears in these Categories:

On Revision: The Only Writing That Counts
William Germano
Paperback
€19.75

Too Famous: The Rich, The Powerful, The Wishful, The Damned, The Notorious
Michael Wolff
Trade Paperback
€18.50