The Rise of Rome: Books One to Five

'the fates ordained the founding of this great city and the beginning of the world's mightiest empire, second only to the power of the gods' Romulus and Remus, the rape of Lucretia, Horatius at the bridge, the saga of Coriolanus, Cincinnatus called from his farm to save the state - these and many more are stories which, immortalised by Livy in his history of early Rome, have become part of our cultural heritage. The historian's huge work, written between 20 BC and AD 17, ran to 12 books, beginning with Rome's founding in 753 BC and coming down to Livy's own lifetime (9 BC). Books 1-5 cover the period from Rome's beginnings to her first great foreign conquest, the capture of the Etruscan city of Veii and, a few years later, to her first major defeat, the sack of the city by the Gauls in 390 BC. The complete Livy in English, available in five volumes from Oxford World's Classics. ABOUT THE SERIES: For over 100 years Oxford World's Classics has made available the widest range of literature from around the globe. Each affordable volume reflects Oxford's commitment to scholarship, providing the most accurate text plus a wealth of other valuable features, including expert introductions by leading authorities, helpful notes to clarify the text, up-to-date bibliographies for further study, and much more. 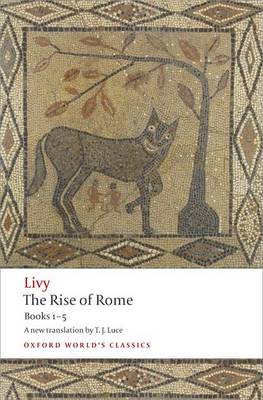 Paperback
The Rise of Rome: Books One to Five also appears in these Categories: