The Shop: An Anthology of Poetry

Poet John Wakeman told The Irish Times that he thought "it would be exciting to start a poetry magazine out of the wilds of West Cork in Ireland." Within a few years THE SHOp became one of Ireland's most highly-regarded poetry magazines, not only for its contents but for its looks. "Unquestionably the most beautiful poetry magazine now in existence," Bernard O'Donoghue said. Seamus Heaney described himself as a "confirmed SHOp-lifter." The title was inspired by W.B. Yeats' "foul rag and bone shop of the heart." The idiosyncratic lower-case 'p' was a whim of the early magazine designer, Joakim Saflund. Over the period between 1999 and 2014, THE SHOp published the work of internationally recognised poets such as Seamus Heaney, Paul Muldoon, Medbh McGuckian, Brendan Kennelly, Paula Meehan, Theo Dorgan, John F. Deane, Derek Mahon and John Montague. Significantly, it also provided a welcome and much needed space for emerging talents. Gradually, international poets began to contribute work. Each issue contained at least one poem in Irish, by poets such as Gabriel Rosenstock and Michael Davitt, with a translation. When John died in 2018 the poetry editor of The Irish Times, Gerard Smyth, wrote, "John Wakeman and his wife Hilary created a communal home for Irish poetry." The President of the Irish Republic, Michael D. Higgins, himself a poet, sent his condolences to Hilary and her family. One of the first women rectors of the Church of Ireland, Hilary had retired in 2001 and became co-editor and designer of THE SHOp. When Hilary Wakeman suggested producing an anthology to celebrate THE SHOp's legacy, it was met with such enthusiasm she knew she had to make it happen. So with the help of her co-editor, the poet Hilary Elfick, together they identified 285 poems from the 840 poets published in THE SHOp during those 15 years. The result is this collection of some of the finest Irish and international poetry ever assembled in one volume. The former Director of Poetry Ireland, Theo Dorgan, stated that "THE SHOp is a part of Irish literary history. That John and Hilary managed to produce such a rich and eclectic journal ... from the side of a hill in West Cork was a source of wonder to us all." 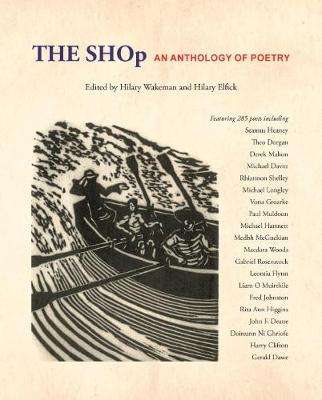 9% offPaperback
The Shop: An Anthology of Poetry also appears in these Categories: