The Sinner and the Saint: Dostoevsky, a Crime and Its Punishment

In the summer of 1865, the former exile Dostoevsky found himself trapped in a cheap hotel in Wiesbaden, unable to leave until he'd paid the bill. Having lost the last of his money at the roulette table, his debts hung heavy over his head, his epileptic seizures were worsening, and his wife and beloved brother were dead. Desperate, a story came to him, a way to write himself out of his predicament: the murderer Raskolnikov, the hot, disorienting swirl of St Petersburg, the axe, the terrible crime, and the murderer's paranoia. The book was Crime and Punishment, and from the moment it was published it was a sensation. But how did this haunting tale of guilt come to be, and why does it still hold such a sway over us all these years later? The Sinner and the Saint gives us the story of the creation of a work of literature that has bewitched readers for over a century, and of the two men so central to it: Dostoevsky himself, and Pierre Francois Lacenaire, a notorious murderer and glamorous egoist who charmed and outraged Paris in the 1830s and whose sensational story provided the germ of the novel. As reports of his trial tore through Europe, readers asked themselves: could the instincts of nihilism, the philosophy inspiring a new generation of Russian revolutionaries, also drive a man to murder? Showing how both men's lives were directed by the intoxicating new ideas swirling around Europe in the nineteenth century, The Sinner and the Saint also reveals why they still appal and entice us today. Thrilling and definitive, this is the story of a masterpiece. 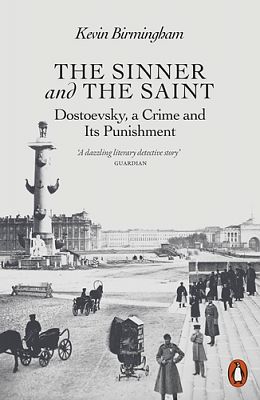 Paperback
The Sinner and the Saint: Dostoevsky, a Crime and Its Punishment also appears in these Categories:

The Danger and the Glory: Irish Authors on the Art of Writing
Hedwig Schwall
Paperback
€25.00

9% off
Lives Of The Saints
Sebastian Barry
Hardback
€16.99

Defeating the Dictators: How Democracy Can Prevail in the Age of the Strongman
Charles Dunst
Trade Paperback
€18.75

Write It All Down: How to Put Your Life on the Page
Cathy Rentzenbrink
Paperback
€12.50