The Twelve Days of Dash and Lily

Soon to be a major NETFLIX series! 'After reading this I wanted to read it all over again' - Zoe Sugg aka Zoella. This glorious collaboration from the New York Times bestselling authors of Nick & Norah's Infinite Playlist was personally selected by Zoella for the Zoella Book Club. A teen romance set against the magical backdrop of New York City in December. It is the ultimate Christmas book. Dash and Lily have been dating for nearly a year, but when Lily's beloved grandfather falls ill, the repercussions take their toll on everyone. Even though they are still together, somehow the magic has gone out of their relationship and it's clear that Lily has fallen out of love with life. Action must be taken! Dash teams up with Lily's brother and a host of their friends, who have just twelve days to get Lily's groove back in time for Christmas. A warm, wintry read that is guaranteed to be a favourite Christmas book for many years to come. Look out for David and Rachel's other young adult novels: Nick and Norah's Infinite Playlist, Naomi and Ely's No Kiss List and Sam and Ilsa's Last Hurrah. Also by David Levithan: Every Day, Another Day, Marly's Ghost, Two Boys Kissing, How They Met and Other Stories, 19 Love Songs. David is the New York Times bestselling author of Boy Meets Boy and Marly's Ghost, while among his many collaborations are Will Grayson, Will Grayson with Fault in Our Stars author John Green, and Nick and Norah's Infinite Playlist with Rachel Cohn, which became a major film. Tiny Cooper from Will Grayson, Will Grayson now has his own novel: Hold Me Closer: The Tiny Cooper Story. David is also a highly respected children's book editor, whose list includes many luminaries of children's literature, including Garth Nix, Libba Bray and Suzanne Collins. He lives and works in New York. Rachel Cohn was born in Maryland, but later moved to New York. Her first novel, Gingerbread, was published in 2002. Since then she has gone on to write many other successful young adult and children's books, several in collaboration with David Levithan. She now lives and writes in Los Angeles, assisted by two very cool cats. For a cosier Christmas YA read, David Levithan and Rachel Cohn's The Twelve Days of Dash and Lily is a he-said, she-said romance about a couple struggling after a year together (the pair first met in Dash and Lily's Book of Dares), and an attempt to rekindle Christmas magic in a world that seems a little too bleak for it to matter. The New York setting lends this quirky love story a glamour that will appeal to young teens... - The Irish Times I loved being in the company of Dash & Lily and was so distraught when I finished the last page of The Twelve Days. I miss those guys. So David & Rachel if you ever read this post ... then you must write a new one each Christmas to keep me going please. - The Book Magpie 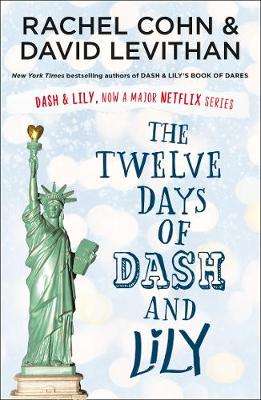 Paperback
The Twelve Days of Dash and Lily also appears in these Categories:

17% off
The Love Curse of Melody McIntyre
Robin Talley
€7.99