Tomorrow Will Be A Good Day: My Autobiography

Pre-order the extraordinary, heartwarming autobiography of Captain Sir Tom Moore, the man who captured the nation's heart in lockdown. Captain Tom Moore is an inspiration. At the height of the Covid-19 pandemic in early April this ninety-nine-year-old Second World War veteran came up with a big idea: he'd walk laps of his garden to raise money for the NHS. Despite using a walking frame as well as recent treatment for cancer and a broken hip, he was determined to hit GBP1000 by his 100th birthday on 30th April. By the time the telegram from the Queen arrived, he'd raised over thirty million pounds. In this, his official autobiography, published in support of the creation of the Captain Tom Foundation, he tells us of his long and dramatic life. How his spirit was forged on the battlefields of Burma where victory was snatched from the jaws of defeat. How he fearlessly raced motorbikes competitively. How, in his nineties, he took off for the Himalayas and Everest, simply because he'd never been. And, finally, how this old soldier came to do his bit for the NHS, becoming the nation's hero in our darkest hour. A modest, decent, charming man with a can-do attitude and a twinkle in his eye, Captain Tom's story is that of a man whose insatiable curiosity and appetite for life have led him around so many unexpected corners - finding both adventure and joy. He only wanted to help other people - and yet he has inspired a nation to believe anything is possible by reminding us all it is never, ever too late. 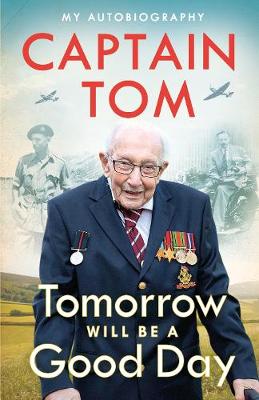 18% offHardback
Tomorrow Will Be A Good Day: My Autobiography also appears in these Categories: