What I Know for Sure

After film critic Gene Siskel asked her, 'What do you know for sure?' Oprah Winfrey began writing the 'What I Know For Sure' column in O, The Oprah Magazine. Saying that the question offered her a way to take 'stock of her life', Oprah has penned one column a month over the last fourteen years, years in which she retired The Oprah Winfrey Show (the highest-rated program of its kind in history), launched her own television network, became America's only black billionaire, was awarded an honorary degree from Harvard University and the Presidential Medal of Freedom, watched friends and colleagues come and go, lost beloved pets and adopted new ones, and celebrated milestone birthdays. Throughout it all, she's continued to offer her profound and inspiring words of wisdom in her 'What I Know For Sure' column in O, The Oprah Magazine. Now, for the first time, these thoughtful gems have been revised, updated, and collected in What I Know For Sure, a beautiful book packed with insight and revelation from Oprah Winfrey. Organized by theme-joy, resilience, connection, gratitude, possibility, awe, clarity, and power-these essays offer a rare and powerful glimpse into the mind of one of the world's most extraordinary women. Candid, moving, exhilarating, uplifting, and dynamic, the words Oprah shares in What I Know For Sure shimmer with the sort of wisdom and truth that readers will turn to again and again. 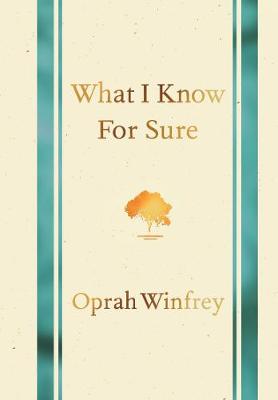 Hardback
What I Know for Sure also appears in these Categories:

19% off
The Gift: A survivor's journey to freedom
Edith Eger
Paperback
€8.99

Good Vibes, Good Life: How Self-Love Is the Key to Unlocking Your Greatness
Vex King
Paperback
€13.55

Remember: The Science of Memory and the Art of Forgetting
Lisa Genova
Trade Paperback
€18.50

Mindset: Changing the Way You Think to Fulfil Your Potential
Carol Dweck
Paperback
€13.55

Excuse Me, Your Life Is Waiting
Lynn Grabhorn
Paperback
€13.40