What is Man? And Other Essays

These acerbic, poignant, and thought-provoking essays concern mankind, its relationship with God, and how the mind works. Twain himself considered them dark and cynical, delaying their publication for many years before finally releasing them as an anonymous, limited-edition collection.

The title essay constitutes a deeply felt blow against religious hypocrisy, written in the form of a Socratic dialogue between a young idealist and an elderly, world-weary professor. The pair debate such issues as whether man is essentially a machine or has free will, whether personal merit is meaningless, and whether people have any impulse other than the pursuit of pleasure or the avoidance of pain. Other featured essays include "The Turning Point of My Life," "As Concerns Interpreting the Deity," "Is Shakespeare Dead?", and more, covering a wide range of Twain's interests. In several places in the text, Twain's own handwritten drawings are included. With its focus on the more sardonic side to the author's humor, What Is Man? merits a place on everyone's Mark Twain reading list. 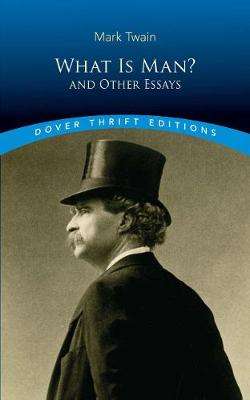 Paperback
What is Man? And Other Essays also appears in these Categories: