Relive the delusional fever-dream of the modern era. 'Thank f*ck for Marina Hyde: the most lethal, vital, screamingly funny truth-teller of our time.' PHOEBE WALLER-BRIDGE 'The most brilliantly funny columnist of our time.' GARY LINEKER 'It's a scientific FACT: Marina Hyde is Britain's funniest writer.' CAITLIN MORAN No other writer is more suited to chronicling the absurd times in which we live. In What Just Happened?! Marina Hyde slashes her way through the hellscape of post-referendum politics, where the chaos never stops. Clamber aboard as we relive every inspirational moment of magic, from David Cameron to Theresa May to Boris Johnson. Marvel at the sights, from Trumpian WTF-ery to celebrity twattery. And boggle at the cast of characters: Hollywood sex offenders, populists, sporting heroes (and villains), dastardly dukes, media barons, movie stars, reality TV monsters, billionaires, police officers, various princes and princesses, wicked advisers, philanthropists, fauxlanthropists, telly chefs, and (naturally) Gwyneth Paltrow. It's the full state banquet of crazy - and you're most cordially invited. Drawn from her spectacularly funny Guardian columns, What Just Happened?! is a welcome blast of humour and sanity in a world where reality has become stranger than fiction. 'A joyous rallying voice in British journalism.' GRAYSON PERRY 'An infinite number of gag-writers, working all day in a gag factory, couldn't come up with any of the perfectly-formed one-liners that populate Marina Hyde's hilarious writing . . . But behind the wit lurks real anger, argument, exasperation and intelligence. Her writing is more than a gentle poke in the ribs: it's a well-wrought and deftly aimed smash in the teeth.' ARMANDO IANNUCCI 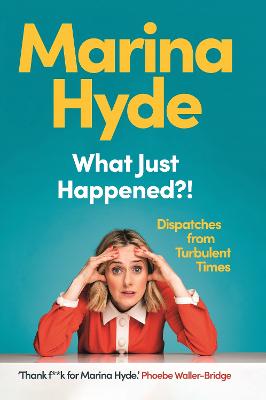