A Bloody Summer: The Irish at the Battle of Britain

The Battle of Britain, regarded by historians as one of the greatest air battles in the history of warfare, was an early turning point in the Second World War. In the summer of 1940, the German army had, with astonishing speed, mercilessly swept aside all before them and were perched on the northern coastline of France. Outright victory over all of Europe was impeded only by the expanse of the English Channel. The supremely confident, yet-to-be defeated Luftwaffe (German Air Force) were eager for continued action, to claim air superiority and victory over an outnumbered RAF and clear the skies for the amphibious invasions of Britain and Ireland. It was vital that the RAF deny them, and so a ferocious and highly strategic aerial battle began that was to rage for more than three months. Among those in the RAF's Spitfire and Hurricane fighter squadrons were Irishmen, who were in the thick of the aerial exchanges, daring 'dog-fights, ' and intrepid interceptions of German bombers. A Bloody Summer: The Irish at the Battle of Britain for the first time tells the true and full story of their heretofore underestimated involvement in this epic aerial encounter 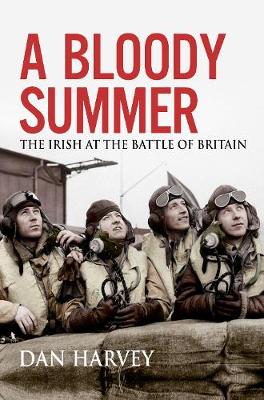 Paperback
A Bloody Summer: The Irish at the Battle of Britain also appears in these Categories: