A Chip Shop in Poznan: My Unlikely Year in Poland

'One of the funniest books of the year' - Paul Ross, talkRADIO WARNING: CONTAINS AN UNLIKELY IMMIGRANT, AN UNSUNG COUNTRY, A BUMPY ROMANCE, SEVERAL SHATTERED PRECONCEPTIONS, TRACES OF INSIGHT, A DOZEN NUNS AND A REFERENDUM. Not many Brits move to Poland to work in a fish and chip shop. Fewer still come back wanting to be a Member of the European Parliament. In 2016 Ben Aitken moved to Poland while he still could. It wasn't love that took him but curiosity: he wanted to know what the Poles in the UK had left behind. He flew to a place he'd never heard of and then accepted a job in a chip shop on the minimum wage. When he wasn't peeling potatoes he was on the road scratching the country's surface: he milked cows with a Eurosceptic farmer; missed the bus to Auschwitz; spent Christmas with complete strangers and went to Gdansk to learn how communism got the chop. By the year's end he had a better sense of what the Poles had turned their backs on - southern mountains, northern beaches, dumplings! - and an uncanny ability to bone cod. This is a candid, funny and offbeat tale of a year as an unlikely immigrant. 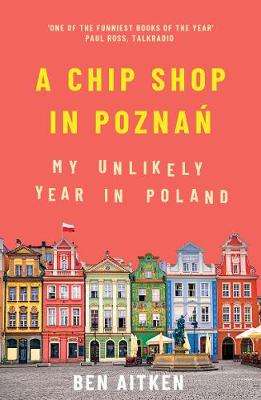 Paperback
A Chip Shop in Poznan: My Unlikely Year in Poland also appears in these Categories:

The Rainbow Atlas: 500 of the World's Most Colourful Places
Taylor Fuller
€24.10

The Frayed Atlantic Edge: A Historian's Journey from Shetland to the Channel
David Gange
€12.50