A Gathering of Giants

Take up the quest in the hilariously epic finale of the How to be a Hero series, A Gathering of Giants, from Cat Weldon, illustrated by Katie Kear.

Unlikely hero Whetstone and banished Valkyrie Lotta are in hiding.

Their quest to find the magic harp strings before Loki, the trickster God, can use them to bring chaos to the Nine Worlds has come to a dead end. And with the evil Valkyrie Glinting-Fire wreaking havoc on earth, nowhere is safe. Especially when Lotta can't control her strange new powers.

So when they overhear that Whetstone's mother, and the second harp string, are in imprisoned in the land of the Frost Giants, Whetstone decides that in order to beat Loki, he's going to have to act like a 'proper' hero and leave the thief he used to be behind.

But with an army of giants, traitorous trolls, brainwashed Valkyries and dangerous long-lost secrets, how can Whetstone and Lotta hope to win when they can't figure out how to be a hero and themselves at the same time?

The explosive finale in this funny, fast-paced series about how to be a friend, what it means to be a hero and just how confusing the Norse Gods really are. 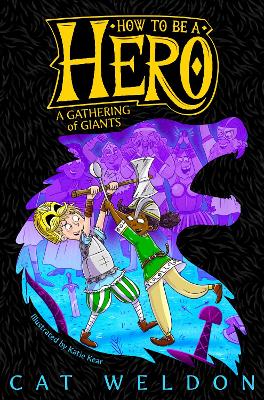 Paperback
A Gathering of Giants also appears in these Categories:

The Maleficent Seven (From the World of Skulduggery Pleasant)
Derek Landy
Paperback
€8.75

Skulduggery Pleasant 9: The Dying of the Light
Derek Landy
Paperback
€9.99

Warriors: The Broken Code #5: The Place of No Stars
Erin Hunter
Paperback
€8.75