A Lesson In Can't

Inspired by the time Celia spent working with Travellers A lesson in Can't tells the story of a teacher's engagement with her students, beginning with her arrival in the classroom and ending when she moves on. The poems tell a story we haven't heard before, about a sustained productive engagement between a literacy teacher and her students during which a genuine relationship develops over time, where real work is done, and with a purpose. It is a space where two worlds engage with each other, with varying degrees of success and sometimes hilarious bursts of mutual misunderstanding. Theory, explication, judgement are all absent.

Celia de Fréine is a poet and playwright who writes in Irish and English. Her poetry has won many awards including the Patrick Kavanagh Award (1994) and Gradam Litríochta Chló Iar-Chonnachta (2004). A lesson in Can't is her eighth collection. 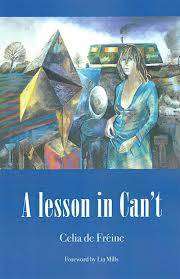 Paperback
A Lesson In Can't also appears in these Categories: