This is a raucous comedy that thrusts a quartet of reckless young lovers headfirst into a world of magic and fantasy, William Shakespeare's A Midsummer Night's Dream is edited by Stanley Wells with an introduction by Helen Hackett in Penguin Shakespeare. "Lovers and madmen have such seething brains, such shaping fantasies that apprehend more than cool reason ever comprehends." (Lovers Lysander and Hermia flee). Athens to escape the authority of their parents, only to be pursued by Hermia's betrothed Demetrius, and her friend Helena. Unwittingly, all four find themselves in an enchanted forest where Oberon, the king of the fairies, and Titania, his queen, soon take an interest in human affairs, dispensing magical love potions and casting mischievous spells. In this dazzling comedy, confusion ends in harmony, as love is transformed, misplaced, and - ultimately - restored. This book contains a general introduction to Shakespeare's life and Elizabethan theatre, a separate introduction to A Midsummer Night's Dream, a chronology, suggestions for further reading, an essay discussing performance options on both stage and screen, and a commentary. William Shakespeare (1564-1616) was born to John Shakespeare and Mary Arden sometime in late April 1564 in Stratford-upon-Avon. He wrote about 38 plays (the precise number is uncertain), many of which are regarded as the most exceptional works of drama ever produced, including Romeo and Juliet (1595), Henry V (1599), Hamlet (1601), Othello (1604), King Lear (1606) and Macbeth (1606), as well as a collection of 154 sonnets, which number among the most profound and influential love-poetry in English. If you enjoyed A Midsummer Night's Dream, you might like The Taming of the Shrew, also available in Penguin Shakespeare. "He could mingle sublimity with pathos, bitterness with joy and peace with love." (Aldous Huxley). 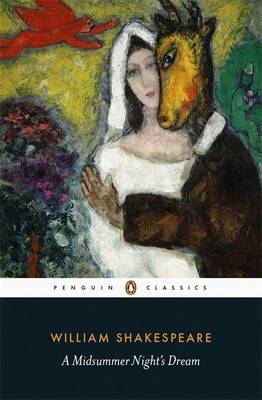 Paperback
A Midsummer Night's Dream also appears in these Categories: