A Short History of Nearly Everything

Bill Bryson describes himself as a reluctant traveller, but even when he stays safely at home he can't contain his curiosity about the world around him. A Short History of Nearly Everything is his quest to understand everything that has happened from the Big Bang to the rise of civilization - how we got from there, being nothing at all, to here, being us. Bill Bryson's challenge is to take subjects that normally bore the pants off most of us, like geology, chemistry and particle physics, and see if there isn't some way to render them comprehensible to people who have never thought they could be interested in science. The ultimate eye-opening journey through time and space, A Short History of Nearly Everything is the biggest-selling popular science book of the 21st century, and reveals the world in a way most of us have never seen it before. 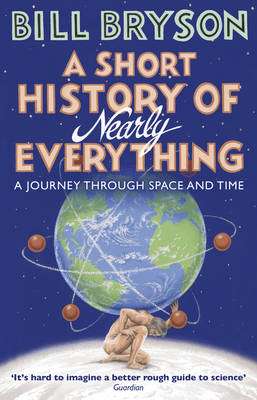 20% offPaperback
A Short History of Nearly Everything also appears in these Categories:

20% off
Can Medicine Be Cured?: The Corruption of a Profession
Seamus O'Mahony
€10.00

24% off
How to Change Your Mind: The New Science of Psychedelics
Michael Pollan
€9.52

22% off
Natural Causes: Life, Death and the Illusion of Control
Barbara Ehrenreich
€9.76

21% off
Physical Intelligence: The Science of Thinking Without Thinking
Scott Grafton
€14.80

23% off
Evolutions: Fifteen Myths That Explain Our World
Oren Harman
€8.68

24% off
Breakfast with Einstein: The Exotic Physics of Everyday Objects
Chad Orzel
€9.52

23% off
Fibonacci's Rabbits: And 49 other breakthroughs that revolutionised mathematics
Adam Hart-Davis
€12.52

24% off
Talking to Robots: A Brief Guide to Our Human-Robot Futures
David Ewing Duncan
€14.28