Winner of the Pulitzer Prize, Tennessee Williams's A Streetcar Named Desire is the tale of a catastrophic confrontation between fantasy and reality, embodied in the characters of Blanche DuBois and Stanley Kowalski. This Penguin Modern Classics edition includes an introduction by Arthur Miller. 'I have always depended on the kindness of strangers' Fading southern belle Blanche DuBois is adrift in the modern world. When she arrives to stay with her sister Stella in a crowded, boisterous corner of New Orleans, her delusions of grandeur bring her into conflict with Stella's crude, brutish husband Stanley Kowalski. Eventually their violent collision course causes Blanche's fragile sense of identity to crumble, threatening to destroy her sanity and her one chance of happiness. Tennessee Williams's steamy and shocking landmark drama, recreated as the immortal film starring Marlon Brando, is one of the most influential plays of the twentieth century. Tennessee Williams (1911-1983) was born in Columbus, Mississippi. When his father, a travelling salesman, moved with his family to St Louis some years later, both he and his sister found it impossible to settle down to city life. He entered college during the Depression and left after a couple of years to take a clerical job in a shoe company. He stayed there for two years, spending the evenings writing. He received a Rockefeller Fellowship in 1940 for his play Battle of Angels, and he won the Pulitzer Prize in 1948 and 1955. Among his many other plays Penguin have published The Glass Menagerie (1944), The Rose Tattoo (1951), Cat on a Hot Tin Roof (1955), Sweet Bird of Youth (1959), The Night of the Iguana (1961), and Small Craft Warnings (1972). If you enjoyed A Streetcar Named Desire, you might like The Glass Menagerie, also available in Penguin Modern Classics. 'Lyrical and poetic and human and heartbreaking and memorable and funny' Francis Ford Coppola, director of The Godfather 'One of the greatest American plays' Observer 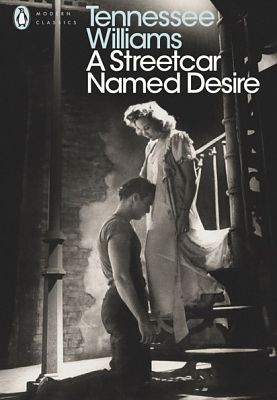 Paperback
A Streetcar Named Desire also appears in these Categories: