Aisling and the City

Aisling is off to New York! The fourth (and penultimate) book in the No. 1 bestselling series. 'Aisling is one of the finest comic creations of all time.' Marian Keyes 'That rare and precious thing: a fictional character you care about like a friend' Lisa McGee, creator of Derry Girls 'A fictional creature as beloved by Irish women as anyone who comes from the pens of Marian Keyes or Winner of the An Post Irish Book Award for popular fiction 2021 Aisling is 31, and she's still a complete Aisling. With BallyGoBrunch flying and the door firmly closed on her relationship with John, Aisling accepts an unexpected job offer and boards a business-class flight to New York in her best wrap dress and heels. As she finds her feet in the Big Apple, she throws herself into the dating game, grapples with 'always-on' work culture, forges and fights for new friendships and brings her good wedges to a party in the Hamptons, much to Sadhbh's dismay. But catching up with family and friends on WhatsApp and email is not the same as sitting in Maguire's putting the world to rights over mini bottles of Pinot Greej and a shared bag of Taytos. And yet New York has so much to offer, not least in the ridey fireman department. When a crisis in Ballygobard makes her doubt her place in Manhattan, can Aisling retain her New York state of mind, or will the lure of home be too much to resist? 'Emer McLysaght and Sarah Breen offer their many readers a safe, convivial, unceremonious berth in challenging times.' The Irish Times 'Aisling is the best of us; the sort of person the world needs.' The Irish Times 'A fictional creature now as beloved by Irish women as anyone who comes from the pens of Marian Keyes or Maeve Binchy, two other writers whose work could also be said to sum up the essential experience of being an Irish woman.' Lia Hynes, Sunday Independent 'Emer McLysaght and Sarah Breen can look into their hearts and know exactly what the women of Ireland want.' Irish Independent 'The literary equivalent of lightning in a bottle. Aisling is a tremendous creation: fun, warm, charming, kind ... Breen and McLysaght have a canny knack of hitting on emotional truths. A brilliantly breezy, companionable read.' Tanya Sweeney, Irish Independent 'A charming creation. Aisling seems on course to match the longevity of her masculine polar opposite Ross O'Carroll Kelly.' Irish Mail on Sunday 'Oh my God, such a warm glow this book gave me. In a sometimes sad world it lifted my heart.' Marian Keyes 'Soul soothing - l laughed on every page.' Sophie White, Sunday Independent 'A tribute to the warmth, charm and resilience of modern Irish women, Aisling is well on her way to becoming one of the most beloved characters in Irish literature.' Irish Independent 'Aisling's voice leaps off the page. It's this depth of character and eye for detail that make comparisons with the Bridget Jones series spot on.' The Independent 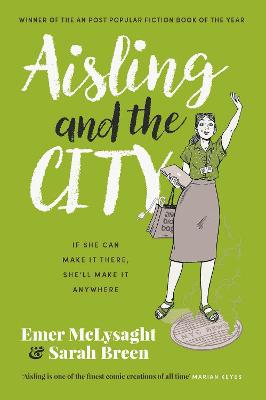 Paperback
Aisling and the City also appears in these Categories:

Oh My God What a Complete Aisling
Emer McLysaght
Paperback
€9.99