An Instance of the Fingerpost

An Instance of the Fingerpost is that rarest of all possible literary beasts - a mystery powered as much by ideas as by suspects, autopsies and smoking guns. Hefty, intricately plotted, and intellectually ambitious, Fingerpost has drawn the inevitable comparisons to Umberto Eco's The Name of the Rose; and, for once, the comparison is apt.

The year is 1663, and the setting is Oxford, England, during the height of Restoration political intrigue. When Dr Robert Grove is found dead in his Oxford room, hands clenched and face frozen in a rictus of pain, all the signs point to poison. Rashomon- like, the narrative circles around Grove's murder as four different characters give their version of events: Marco da Cola, a visiting Italian physician--or so he would like the reader to believe; Jack Prestcott, the son of a traitor who fled the country to avoid execution; Dr. John Wallis, a mathematician and cryptographer with a predilection for conspiracy theories; and Anthony Wood, a mild- mannered Oxford antiquarian whose tale proves to be the book's "instance of the fingerpost" (the quote comes from the philosopher Bacon, who, while asserting that all evidence is ultimately fallible, allows for "one instance of a fingerpost that points in one direction only, and allows of no other possibility").

Like The Name of the Rose, this is one whodunit in which the principal mystery is the nature of truth itself. Along the way, Pears displays a keen eye for period details as diverse as the early days of medicine, the convoluted politics of the English Civil War, and the newfangled fashion for wigs. Yet Pears never loses sight of his characters, who manage to be both utterly authentic denizens of the 17th century and utterly authentic human beings. As a mystery, An Instance of the Fingerpost is entertainment of the most intelligent sort; as a novel of ideas, it proves equally satisfying. 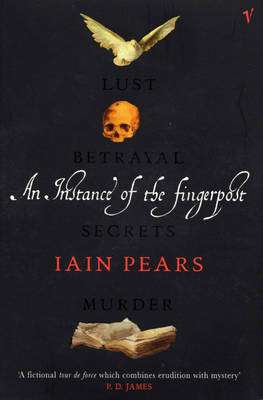 2.5% offPaperback
An Instance of the Fingerpost also appears in these Categories: