Away Days: Thirty Years of Irish Footballers in the Premier League

Over the last thirty years, the English Premier League has grown to become the richest and most popular league in football  and the Irish have been at the heart of its success since the very beginning.

Through exclusive interviews with many of the greatest Irish players to ever play in the Premiership, and an in-depth analysis of Irish players involvement of the last three decades of the league, Gareth Maher showcases the astounding contribution that the Republic of Ireland has made to the greatest league on earth.

With insights from Seamus Coleman, John OShea, Niall Quinn, Shay Given, Jonathan Walters, Kevin Doyle, Andrew Omobamidele and many more, Away Days uncovers the good, the bad & the ugly of a League that has been home to almost two-hundred Irish players.

This is the telling of Irelands impact on the Premier League as told through the stories of the players who have experienced the title wins and the relegation scraps, the big-money moves and the cancelling of contracts, the heros acclaim and the villains disdain over three whirlwind decad 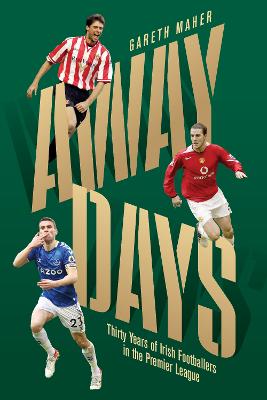 Trade Paperback
Away Days: Thirty Years of Irish Footballers in the Premier League also appears in these Categories:

20% off
After the Storm
Damian Lawlor
Trade Paperback
€16.99

Why We Swim
Bonnie Tsui
Paperback
€13.75