Back From the Brink

Paul McGrath is Ireland's best loved sportsman and also its least understood. An iconic football presence during a professional career stretching over 14 years, he played for his country in the European Championship finals of 1988 and the World Cup finals of 1990 and 1994. But, behind the implied glamour of life in the employ of great English clubs like Manchester United and Aston Villa, McGrath wrestled with a range of destructive emotions that made his success in the game little short of miraculous.

That story has until now never been told. It is a story that runs from a hard, hidden childhood spent in Dublin's orphanages all the way to the pain of two marriage break-ups and the struggle to cope with life after football. Quite apart from his all too public struggle with alcoholism, the story runs through the surreal highs and calamitous lows of a life lived habitually on the edge of chaos.

It is not just a football story. It is an extraordinary human story that is certain to surprise with its candour. Here, for the first time, read about the father he never met; the mother whose love never died; the routine loneliness and ritual bullying endured by a black kid growing up behind closed doors in 1960s Dublin; the emotional breakdown suffered on leaving that institution; the recovery that - remarkably - brought him all the way to Old Trafford; the rollercoaster ride that followed.

Here, the guilt, fear, self-loathing are all laid bare in a story fired with hope and determination for the future. It may well be the most candid sports book ever written. 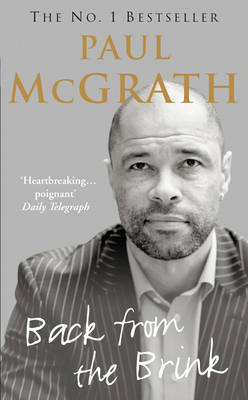 Paperback
Back From the Brink also appears in these Categories:

How to Win : Rugby and Leadership
Clive Woodward
€13.25

Bounce : The Myth of Talent and the Power of Practice
Matthew Syed
€10.95

Red Card to Racism: The Fight for Equality in Football
Harry Harris
€10.95

Marathoner: What to Expect When Training for and Running a Marathon
Matthew Huff
€21.90