Believe Us: How Jurgen Klopp transformed Liverpool into title winners

*PRE-ORDER NOW* 'Our incredible story under a supreme manager shared in all its glory.' Jordan Henderson The definitive account of Jurgen Klopp's astonishing revival of Liverpool Football Club. Liverpool Football Club's stunning 2020 Premier League title victory deserves a place in the official record of great sporting achievements. The Reds became the first team in British history to hold the European Cup, Super Cup, World Club Cup and domestic league title simultaneously in a masterclass of free-scoring, full throttle footballing prowess. Journalist Melissa Reddy reveals the inside story of Jurgen Klopp's astonishing revival of Liverpool, culminating in the club's first domestic league trophy in thirty years. Featuring incisive and insightful reporting, and the thoughts of players, management and club hierarchy, Believe Us paints a vivid picture of this titanic sporting success. Reddy's unparalleled access to the club brings interviews with everyone from fans and key backroom staff to players including talismanic captain Jordan Henderson, and of course Klopp himself. The perfect gift for any fan of the club or its inimitable leader, this is heavy metal football writing at its best. 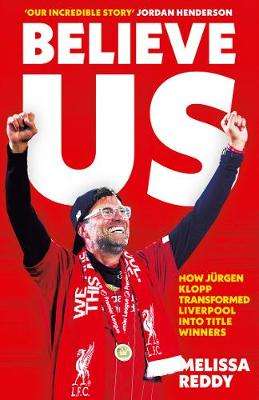 Believe Us: How Jurgen Klopp transformed Liverpool into title winners also appears in these Categories: