From the high-ranking officer who wrote the still-classified British military analysis of the war in Iraq comes the authoritative history of two conflicts which have overshadowed the beginning of the 21st century. Inextricably linked to the ongoing 'War on Terror', the wars in Iraq and Afghanistan dominated more than a decade of international politics, and their influence is felt to this day. Blood, Metal and Dust is the first military history to offer a comprehensive overview of the wars in Afghanistan and Iraq, providing in-depth accounts of the operations undertaken by both US and UK forces. Brigadier Ben Barry explores the wars which shaped the modern Middle East, providing a detailed narrative of operations as they unfolded. With unparalleled access to official military accounts and extensive contacts in both the UK and the US militaries, Brigadier Barry is uniquely placed to tell the story of these controversial conflicts, and offers a rounded account of the international campaigns which irrevocably changed the global geopolitical landscape. 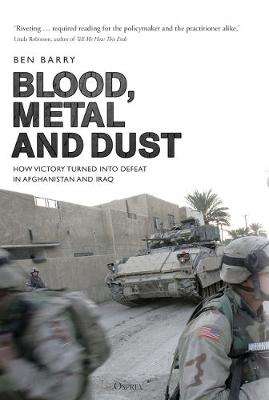 Hardback
Blood, Metal and Dust also appears in these Categories: