"Disturbing, moving, and funny; these stories help amplify Williams' tragic vision, for like the plays, they underline his preoccupation and insight into the conflicts of the human heart". ("New York Times"). Acclaimed as one of America's most successful playwrights, Tennessee Williams also published four volumes of short stories. In "Collected Stories", these volumes are combined with a wealth of unpublished and uncollected work, ranging from his first his story published in "Weird Tales" when William was seventeen, to his later frank homosexual fantasies. Williams was famous for insisting he write every morning. Even during his darkest days, while mourning a lover, or abusing some substance - he would write. "The Collected Stories" are from every period of his life, and recreate the milieux Williams knew and chronicled so movingly - from his gypsy youth in St. Louis and New Orleans to his days of celebrity in Hollywood and New York. "The two ingredients of Williams' plays - great gab and steamy sex - are both here in the stories". (Edmund White, "Sunday Times"). 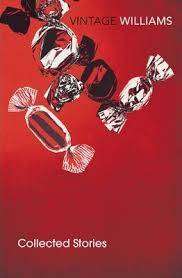