The cosmic clouds of dust and gas that populate the heavens, known as Nebulae, hit the headlines with the release of the famous image of the Pillars of Creation, captured by the Hubble Space Telescope. But the night sky contains thousands of other glorious nebulae, in an infinite variety of colours and shapes. This is the first book ever to present nebulae in 3-D, revealing the science behind the beautiful pictures that hang in our galactic art gallery. The story is compelling: all the elements that constitute our world, and build our human bodies, were made in the stars, and stars are born, die and are recycled in nebulae. So the tale of the birth and death of stars and the creation of elements is part of our own human story. As Joni Mitchell famously sang: We are stardust. When he's not touring with his band Queen, Brian May is a PhD astrophysicist actively engaged with several current NASA and JAXA missions. Here he joins forces again with David J. Eicher, the editor of Astronomy magazine, to share the extraordinary world of nebulae with anyone who is curious about the cosmos. 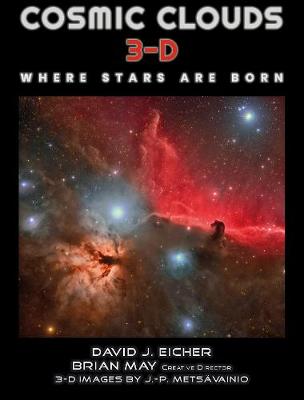 Hardback
Cosmic Clouds 3-D: Where Stars Are Born also appears in these Categories: