Successful New York psychiatrist Richard Gallagher was skeptical yet intrigued when a hard-nosed, no-nonsense Catholic priest asked him to examine a woman for a possible exorcism. Meeting her, Gallagher was astonished. The womans behavior defied logic. In an instant, she could pinpoint a persons secret weaknesses. She knew how individuals shed never known had died, including Gallaghers own mother, who passed away after a lengthy battle with ovarian cancer. She spoke fluently in multiple languages, including Latinbut only when she was in a trance.

This was not psychosis, Gallagher concluded. It was, in his scientific estimation, what could only be describe as paranormal ability. The woman wasnt mentally disturbedshe was possessed. This remarkable case was the first of many that Gallagher would encounter. Sought after today by leaders of all faithsministers, priests, rabbis and imams, Gallagher has spent a quarter-century studying demonic activity and exorcisms throughout history and has witnessed more cases than any other psychiatrist in the world today.

In this eerie and enthralling book, Gallagher chronicles his most famous cases for the first time, including:

Going beyond horror movies and novels, Demonic Foes takes you deep into this hidden world, sharing in full details of these true-life tales of demonic possession. 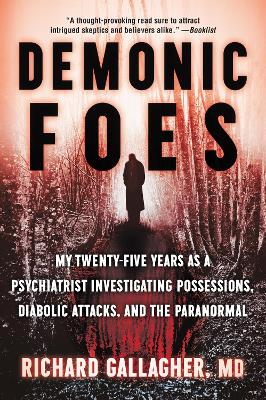 The Best Catholics in the World
Derek Scally
Paperback
€12.50

The Book of All Books
Roberto Calasso
Paperback
€16.25

The Word: On the Translation of the Bible
Dr John Barton
Hardback
€31.25

The Ninety-Five Theses and Other Writings
Martin Luther
Paperback
€15.65

How to Calm Your Mind: Finding Peace and Productivity in Anxious Times
Chris Bailey
Hardback
€23.75

Greatest Self-Help Book (is the one written by you)
Vex King and Kaushal
Hardback
€20.99

6% off
Elizabeth Taylor: The Grit and Glamour of an Icon
Kate Andersen Brower
Trade Paperback
€19.99

20% off
The Trials of Life: A Natural History of Animal Behaviour
David Attenborough
Trade Paperback
€16.99

20% off
Leonard Cohen, Untold Stories: That's How the Light Gets In, Volume 3
Michael Posner
Hardback
€24.99

15% off
Whatever Next?: Lessons from an Unexpected Life
Anne Glenconner
Trade Paperback
€15.99