The hilarious, award-winning and global bestseller "Diary of a Wimpy Kid: Cabin Fever" is now in paperback! The sixth instalment in the "Diary of a Wimpy Kid" series - it's perfect for readers of 8+ and also reluctant readers. And you can also discover Greg on the big screen in any one of the three "Wimpy Kid Movie" box office smashes. Greg Heffley is in big trouble. School property has been damaged and Greg is the prime suspect. But the crazy thing is, he's innocent! Or at least sort of. The authorities are closing in, but then a surprise blizzard hits and the Heffley family is trapped indoors. Greg knows that when the snow melts he is going to have to face the music but could any punishment be worse than being stuck inside with your family? Praise for Jeff Kinney: The world has gone crazy for Jeff Kinney's "Diary of a Wimpy Kid". ("Sun"). "Kinney is right up there with J K Rowling as one of the bestselling children's authors on the planet". ("Independent"). "The most hotly anticipated children's book of the year is here - "Diary of a Wimpy Kid"". ("Big Issue"). "Hilarious". ("Telegraph"). Jeff Kinney is an online game developer and designer, and a number 1 "New York Times" bestselling author. Jeff has been named one of "Time" magazine's 100 Most Powerful People in the World. Jeff is also creator of Poptropica.com, which was names one of "Time" magazine's 50 Best Websites. He lives with his family in Massachusetts, USA. 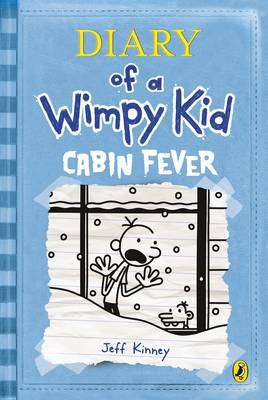 Paperback
Diary Of A Wimpy Kid 6: Cabin Fever also appears in these Categories:

Arsenic for Tea: A Murder Most Unladylike Mystery
Robin Stevens
€8.75

The Mystery of the Sheela na Gig
Sheila O'Keeffe
€10.00