From 1961 to 1965 Irish foreign policy embarked on new directions. Under Taoiseach Sean Lemass Ireland sought membership of the EEC, a process which stalled temporarily in 1963 when French President Charles de Gaulle vetoed Britain's application for EEC membership and Ireland's application, along with applications of Denmark and Norway, was halted a result. Away from Europe the first half of the 1960s saw Irish diplomats at the United Nations develop Ireland's position as an independent-minded member of the organisation and Ireland took steps to promote nuclear non-proliferation, decolonisation and the effective financing of peacekeeping operations. In 1962 Ireland sat on the Security Council for a temporary term which coincided with the Cuban Missile crisis. Ireland's Defence Forces continued to serve with United Nations peacekeeping missions. With the end of the UN's mandate in the Congo in 1963 Irish soldiers joined the first units of UN peacekeepers deployed to Cyprus with UNFICYP in 1964. DIFP XII covers these major themes, but it also includes significant documents on the June 1963 visit of President John F Kennedy to Ireland, early steps taken to create Ireland's development aid policy and the opening of Irish missions in Nigeria and India. British-Irish relations and North-South relations receive considerable attention as Dublin and London took steps to establish a free trade area in the aftermath of the failure of Britain's EEC entry talks and on the island of Ireland Sean Lemass and Prime Minister of Northern Ireland Terence O'Neill met to seek common ground between Dublin and Belfast in areas of cross-border co-operation. One area of interest the volume reveals for the first time is the extent to which Sean Lemass controlled the exercise of Ireland's foreign policy, often instructing Minister for External Affairs Frank Aiken as to the direction Irish foreign policy should take. 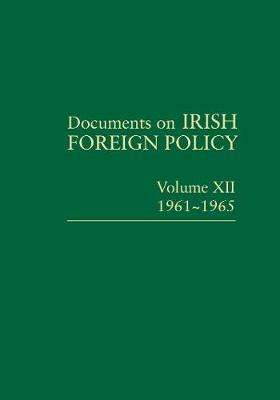