Ethna MacCarthy (1903-59) was a Scholar and a First-Class Moderator at Trinity College Dublin where she taught languages in the thirties and forties before studying medicine. Perhaps best known to posterity for her relationship with Samuel Beckett and appearance in several of his writings, including the play Krapp's Last Tape, she also had a remarkable influence on a number of writers such as Denis Johnston and Con Leventhal, who she later married. Found among Leventhal's papers when he died were MacCarthy's overlooked work, revealing a highly intelligent and culturally sophisticated poet. This collection, published here for the first time, unearths an exceptionally rich and intriguing body of work by a remarkable woman who was ahead of her time. MacCarthy played an important and creative part of a cosmopolitan and free-thinking post-Independence Dublin, publishing translations from Spanish and German poets before developing a highly distinctive style of her own. Her poetry contains exposed lunar and death-haunted landscapes, tales of multifaceted women, and subversive ideas around femininity. Her work highlights a gifted translator who artfully captures the feeling evoked by the original languages. According to Denis Johnston `she has never been shy, can be frank, and outspoken to a degree, is absolutely fearless, intolerant of mediocrity and finds it difficult to suffer fools gladly'. MacCarthy merits reappraisal as an intellectual presence in an age that did not often promote, if acknowledge at all, the woman's voice. This unique collection of Ethna MacCarthy's poems is published as an innovative first step in establishing her as one of the outstanding Irish poets of the mid-20th century. 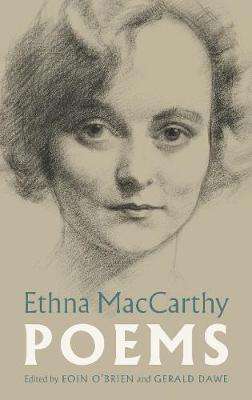 9.5% off
Pathogens Love A Patsy: Pandemic and Other Poems
Rita Ann Higgins
€12.00