A visually striking historical guide spanning all of human history, from its beginning to the present day Take a rollercoaster ride through the past with this fact-packed and visually stunning children's history encyclopedia. Discover what the major turning points in history were, from the evolution and migrations of early humans, to the rise and fall of great empires such as Ancient Rome and the Aztecs. Get the inside track on wars and conflict, from medieval knights to the major clashes of World War I, World War II, the Cold War, and so much more. This visual reference encyclopedia uses stunning photographs and supporting illustrations to trace the history of science from Ancient Greece, through the major contributions of the Islamic world, the Scientific Revolution, the Space Race, and on to modern technology. The arts, religions, and ideas are also showcased, from the Renaissance and Greek myths to the origins of major world religions, such as Christianity and Buddhism. Explanatorium of History is the ultimate visual encyclopedia for kids aged 10-14, telling the story of "us", from the dawn of human history up to the present day.

Despatched after 11/11/21. A separate order should be placed for this item. If you order this along with other items, your entire order will be held and despatched when complete. 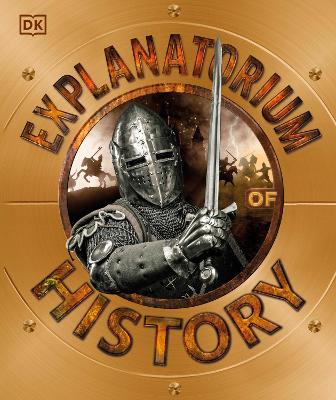 Hardback
Explanatorium of History also appears in these Categories:

5% off
The Book of Mythical Beasts and Magical Creatures
DK
Hardback
€19.99

Timelines of Everything
DK
Hardback
€24.70

The House by the Lake: The Story of a Home and a Hundred Years of History
Thomas Harding
Paperback
€11.10