Fake News and the Irish War of Independence

by Michael B. Barry

As their untruths became known, fewer people began to believe the British reports. In this fascinating book Michael B. Barry tells the story of fakery and dissimulation that emanated from Dublin Castle, including the so-called Battle of Tralee staged at Vico Road, Killiney, the forged editions of the Irish Bulletin and attempts after the Kilmichael ambush to paint the IRA as axe-wielding fiends.

Also covered are the later careers of the practitioners of false news, which ranged from helping General Francisco Franco to fly to Morocco to start the Spanish Civil War, to being ennobled and taking a seat in the British House of Lords. 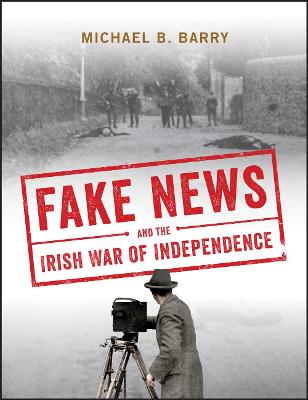 Hardback
Fake News and the Irish War of Independence also appears in these Categories:

An Unconsidered People: The Irish in London
Catherine Dunne
Paperback
€14.95

7% off
Ireland's Hidden Histories: A Story a Day from Our Little Known Past
Frank Hopkins
Paperback
€14.95

We Go Into Action Today at Noon
Eamonn Duggan
Hardback
€19.99