From the Outside: Rethinking Church Doctrine

Eight years ago the popular and outspoken priest Tony Flannery was withdrawn from his ministry by his religious congregation, the Redemptorists, under orders from the Congregation for the Doctrine of the Faith in the Vatican. The CDF took issue with some of his writings, saying they were heretical. He was forbidden to perform priestly duties, or to write any articles or give interviews. Refusing to submit to this sentence, the intervening eight years have given him a greater degree of freedom of thought and action than he had ever experienced during his life as a priest in ministry.

From the Outside is a product of what he has ascertained and come to believe during those years. The Church is facing many challenges. A great many people are leaving or have left; priest numbers are declining; clerical sex abuse still festers; women are excluded from ministry and decision-making, and that is becoming more and more of an anomaly as time goes by. Leadership in the Church seems incapable of dealing with these challenges, leaving the Church with a serious credibility issue. Along with these issues, From the Outside also deals with a much more fundamental and intractable problem, namely the problem of Church doctrine. Many of what are regarded as fundamental doctrines in the Church date from the early centuries of Christianity. To hold that what was defined about God over fifteen hundred years ago must be accepted without question in the twenty-first century is no longer credible. Flannery outlines what needs to be changed, both in the content and language of doctrine, and in the images and metaphors used. Challenging and controversial, From the Outside asks the Church leadership to look again at some of its basic doctrines. Change is needed. 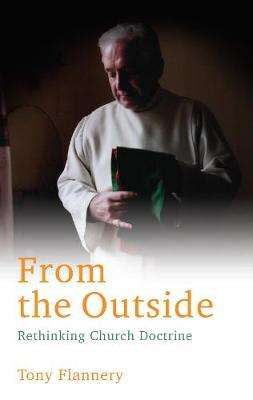 11% offPaperback
From the Outside: Rethinking Church Doctrine also appears in these Categories:

Veritas: a Harvard professor, a con man, and the Gospel of Jesus's Wife
Ariel Sabar
€22.90

Who Is an Evangelical?: The History of a Movement in Crisis
Thomas S. Kidd
€18.05

The Sun My Heart: The Companion to The Miracle of Mindfulness
Thich Nhat Hanh
€18.05

Healing Emotions: Conversations with the Dalai Lama on Psychology, Meditation, a
Dalai Lama
€19.25

Kindness, Clarity, and Insight: The Fundamentals of Buddhist Thought and Practic
Dalai Lama
€20.45

Everything is Spiritual
Rob Bell
€18.05

A Journey of a Thousand Miles: Inspirations from the Tao Te Ching
Insight Editions
€9.05

Playing with Fire: A Modern Investigation into Demons, Exorcism, and Ghosts
Billy Hallowell
€10.85

Now and Zen: Notes from a Buddhist Monastery: with Illustrations
Eiyu Murakoshi
€12.05

12.5% off
Thirty-Two Words for Field: Lost Words of the Irish Landscape
Manchan Magan
€19.99

17% off
What is Beautiful in the Sky: A Memoir of Endings and Beginnings
Michael Harding
€14.99