When a letter arrives for unhappy but ordinary Harry Potter, a decade-old secret is revealed to him that apparently he's last to know.

His parents were wizards, killed by a Dark Lord's curse when Harry was just a baby, and which he somehow survived.

Leaving his unsympathetic aunt and uncle for Hogwarts, a wizarding school brimming with ghosts and enchantments, Harry stumbles upon a sinister mystery when he finds a three-headed dog guarding a room on the third floor.

Then he hears of a missing stone with astonishing powers which could be valuable, dangerous - or both. An incredible adventure is about ot begin!

These new editions of the classic and internationally bestselling, multi-award-winning series feature instantly pick-up-able new jackets by Jonny Duddle, with huge child appeal, to bring Harry Potter to the next generation of readers. It's time to PASS THE MAGIC ON . 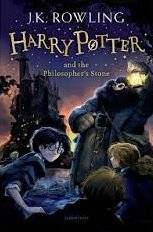 20% off
The Stolen Heir: A Novel of Elfhame, from the author of The Folk of the Air seri
Holly Black
Paperback
€14.99