Heavy Bear Who Goes With Me

The Heavy Bear Who Goes With Me is the ultimate reader's companion to poetry: a selection of 100 classic poems from five centuries with lively "companion" commentaries to go with and illuminate each poem.

The heavy bear can be many things which go with the bearer: another self or alter ego, the burden of poetry or art, what weighs us down and makes us do what we don't really want to do as well as what pulls us back to our selves, the animal side which makes us bearable or human. The editors' selection ranges from Wyatt, Ralegh and Shakespeare in the 16th century, to Donne, Milton and Marvell in the 17th, to Swift, Pope and Johnson in the 18th. It embraces the Romantic visions of Blake, Wordsworth, Coleridge, Shelley and Keats, as well as the later, darker outlook of Browning, Tennyson and Hardy, and seeks enlightenment in the shadowlands of Emily Dickinson, Wilde and Yeats. As well as journeying with the reader through some of the greatest poems in the English language, The Heavy Bear encounters many modern poets, not least Delmore Schwartz, whose sense of conflict between self and society gave birth to this anthology's title-poem, 'The Heavy Bear Who Goes With Me'. Others include some of the major figures in Irish poetry Brendan Kennelly knew personally as well as wrote about, including Patrick Kavanagh, Seamus Heaney, Michael Longley, Derek Mahon and Eavan Boland.

The poems keep each other company in this highly original compilation, questioning each other in a continuing thematic, imagistic debate which the editors seek to explore in their responses, trying at all times to define their sense and vision of poetry as disturbing, questioning, enlightening companionship for the reader.

Both editors are renowned communicators of poetry: Brendan Kennelly (1936-2021) as one of Ireland's best-loved poets, as Professor of Modern Literature at Trinity College Dublin, and as a popular cultural commentator on Irish television; Neil Astley as founder and editor of Bloodaxe Books and editor of the Staying Alive anthology series. 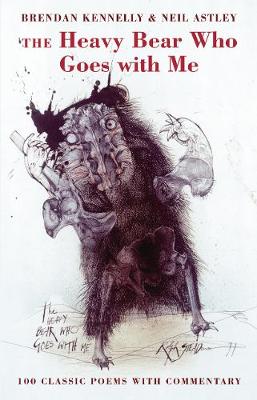 Paperback
Heavy Bear Who Goes With Me also appears in these Categories:

14% off
Every Day is a Fresh Beginning
Aoibhin Garrihy
Hardback
€13.99

As If By Magic: Selected Poems
Paula Meehan
Paperback
€18.00

13% off
Pathogens Love A Patsy: Pandemic and Other Poems
Rita Ann Higgins
Paperback
€12.00

Lock of Poems Recitations and Good Ones
Seamus O'Rourke
Paperback
€15.00

5% off
Exploring English 3 : Poetry We Did for Our Inter Cert 3
Augustine Martin
Paperback
€18.99