Illustrated History of the Irish Revolution, 1916-1923

by Michael B. Barry

The Easter Rising, the War of Independence and the Civil War make up the Irish Revolution, whose legacy is the independent State that we have today. A Republic was declared by the insurgents in 1916. The First Dáil convened in 1919 and at the same time a ruthless guerrilla war began against the forces of the British Crown. Over the following years, as the news from Ireland got worse for the British, they agreed to negotiate. A Truce was followed by a Treaty in December 1921. The Dominion status granted was the cause of the Civil War which broke out six months later. The Free State Government prosecuted the war in a systematic manner, using its ever-growing army. The death of Liam Lynch, leader of the anti-Treaty IRA, on a bare mountain in April 1923 marked the defeat of the anti-Treaty side.

With additional information and many new photographs, Michael B. Barry draws together the events of the years 191623 into this ground-breaking book. Included are over 800 images, specially-created maps, old documents and periodicals from Ireland and abroad. An extra dimension is the selected number of painstakingly colourised photographs which bring the events of that era to life.

If you want to understand the story of the Irish Revolution, from its origins in 1916 all the way to the end of the Civil War, this is the book.

A lavishly illustrated book which brings the Irish Revolution to life.
Contains 800 images, many never published before. 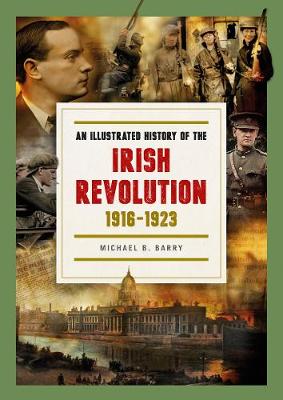 20% offHardback
Illustrated History of the Irish Revolution, 1916-1923 also appears in these Categories: