This major illustrated study investigates farmhouse and cabin furniture from all over the island of Ireland. It discusses the origins and evolution of useful objects, what materials were used and why, and how furniture made for small spaces, often with renewable elements, was innate and expected. Encompassing three centuries, it illuminates a way of life that has almost vanished. It contributes as much to our knowledge of Ireland's cultural history as to its history of furniture. This is a is a substantially different book from Irish Country Furniture, 1700-1950, published by Yale UP in 1993 and reprinted several times. The new book now incorporates the findings of a lot of recent research. Nearly all the black and white pictures in the 1993 book are now in colour, or have been changed for the better, and now include different examples (except archive pictures). Many of the author's fieldwork photographs from the late 1980s, have been digitised and will now be published for the first time. The extent has almost doubled; there are an extra 120 illustrations; the main text has been fully updated and revised; there is a new chapter 'Small Furnishings and Utensils' and there is a new Preface by Louis Cullen. Reflecting the considerable addition of new material, the time scale is also broadened to include discussions of objects and interiors up to 2000. It represents extraordinary value. The book looks at influences such as traditional architecture, shortage of timber, why and how furniture was painted, and the characteristics of designs made by a range of furniture makers. The incorporation of natural materials such as bog oak, turf, driftwood, straw, recycled tyres or packing cases is viewed in terms of use, and durability. Chapters individually examine stools, chairs and then settles in all their ingenious and multi-purpose forms. How dressers were authentically arranged, with displays varying minutely according to time and place, reveal how some had indoor coops to encourage hens to lay through winter. Some people ate communally or slept in outshot beds, in the coldest north-west, all this is illustrated through art as well as surviving objects. 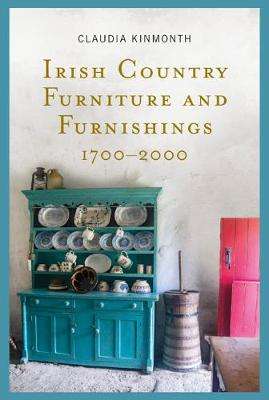 Irish Country Furniture and Furnishings 1700-2000 also appears in these Categories: