Journalism entered the twenty-first century caught in a paradox. The world had more journalism, across a wider range of media, than at any time since the birth of the western free press in the eighteenth century. Western journalists had found themselves under a cloud of suspicion: from politicians, philosophers, the general public, anti-globalization radicals, religious groups, and even from fellow journalists. Critics argued that the news industry had lost its moral bearings, focusing on high investment returns rather than reporting and analysing the political, economic, and social issues of the day. Journalism has a central and profound impact on our worldview; we find it everywhere from newspapers and television, to radio and the Internet. In the new edition of this thought-provoking and provocative Very Short Introduction, Ian Hargreaves examines the world of contemporary journalism. By looking not only at what journalism has been in the past, but also what it is becoming in the digital age, he examines the big issues relating to reportage, warfare, celebrity culture, privacy, and technology worldwide. ABOUT THE SERIES: The Very Short Introductions series from Oxford University Press contains hundreds of titles in almost every subject area. These pocket-sized books are the perfect way to get ahead in a new subject quickly. Our expert authors combine facts, analysis, perspective, new ideas, and enthusiasm to make interesting and challenging topics highly readable. 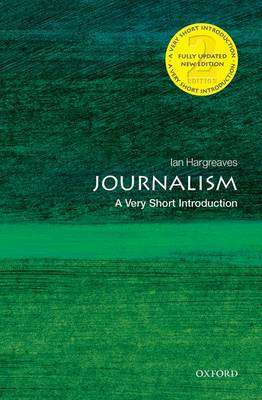 2.5% off
Five Stars: The Communication Secrets to Get From Good to Great
Carmine Gallo
€12.20

4.5% off
Breaking News: The Remaking of Journalism and Why It Matters Now
Alan Rusbridger
€13.10

3.5% off
Frenemies: The Epic Disruption of the Advertising Industry (and Why This Matters
Ken Auletta
€18.10

5% off
YouTubers: How YouTube shook up TV and created a new generation of stars
Chris Stokel-Walker
€23.80

3.5% off
Videocracy: How YouTube Is Changing the World
Kevin Allocca
€15.65

3.5% off
Becoming Digital: Toward a Post-Internet Society
Vincent Mosco
€20.50

3.5% off
The Online Journalism Handbook: Skills to Survive and Thrive in the Digital Age
Liisa Rohumaa
€39.75