Luke Kelly (1940-1984) was an Irish singer and folk musician from Dublin most famous as a member of the band The Dubliners. Kelly was one of the best-known figures of the Irish folk music movement of the 1960s and 1970s. A Dubliner from the north inner city. He emigrated to Britain in 1958. There he first became involved in the growing international folk music scene in which Ewan MacColl was a central figure. In 1962 Luke Kelly returned to Dublin and quickly became a central figure in the city's burgeoning folk music community. He formed a folk group with Drew, McKenna, Ciaran Bourke and John Sheahan, which he named The Dubliners. In 1965, Kelly married the actress Deirdre O'Connell, one of the founders of the Focus Theatre. In the mid-1960s, Luke moved to England and on returning, he rejoined the Dubliners. Luke remained a politically engaged musician, and many of the songs he recorded dealt with social issues, the arms race and war, workers' rights and Irish nationalism. Luke Kelly was diagnosed with a brain tumour in 1980, and died in 1984. He remains a Dublin icon and his music is widely regarded as one of the city's cultural treasures. The Ballybough Bridge in the north inner city of Dublin has been renamed the The Luke Kelly Bridge. 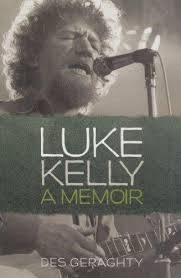 Paperback
Luke Kelly A Memoir also appears in these Categories: