Machiavelli: His Life and Times

'A wonderfully assured and utterly riveting biography that captures not only the much-maligned Machiavelli, but also the spirit of his time and place. A monumental achievement.' - Jessie Childs, author of God's Traitors. 'A notorious fiend', 'generally odious', 'he seems hideous, and so he is.' Thanks to the invidious reputation of his most famous work, The Prince, Niccolo Machiavelli exerts a unique hold over the popular imagination. But was Machiavelli as sinister as he is often thought to be? Might he not have been an infinitely more sympathetic figure, prone to political missteps, professional failures and personal dramas? Alexander Lee reveals the man behind the myth, following him from cradle to grave, from his father's penury and the abuse he suffered at a teacher's hands, to his marriage and his many affairs (with both men and women), to his political triumphs and, ultimately, his fall from grace and exile. In doing so, Lee uncovers hitherto unobserved connections between Machiavelli's life and thought. He also reveals the world through which Machiavelli moved: from the great halls of Renaissance Florence to the court of the Borgia pope, Alexander VI, from the dungeons of the Stinche prison to the Rucellai gardens, where he would begin work on some of his last great works. As much a portrait of an age as of a uniquely engaging man, Lee's gripping and definitive biography takes the reader into Machiavelli's world - and his work - more completely than ever before. 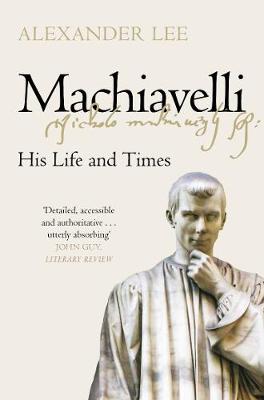 Paperback
Machiavelli: His Life and Times also appears in these Categories:

New Yorkers: A City and Its People in Our Time
Craig Taylor
€20.70

18% off
Beyond the Tape: The Life and Many Deaths of a State Pathologist
Marie Cassidy
€15.99

Finding Chika: A Little Girl, an Earthquake, and the Making of a Family
Mitch Albom
€10.95

Staring at Lakes: A Memoir of Love, Melancholy and Magical Thinking
Michael Harding
€10.95

A Year at the Chateau
Dick Strawbridge
€10.95

To the Greatest Heights
Vanessa O'Brien
€18.30