Pete McCarthy's tale of his hilarious trip around Ireland has gained thousands of fans all over the world. Pete was born in Warrington to an Irish mother and an English father and spent happy summer holidays in Cork. Years later, reflecting on the many places he has visited as a travel broadcaster, Pete admits that he feels more at home in Ireland than anywhere. To find out whether this is due to rose-coloured spectacles or to a deeper tie with the country of his ancestors, Pete sets off on a trip around Ireland and discovers that it has changed in surprising ways. Firstly obeying the rule 'never pass a pub with your name on it', he encounters McCarthy's bars up and down the land, and meets English hippies, German musicians, married priests and many others. A funny, affectionate look at one of the most popular countries in the world. 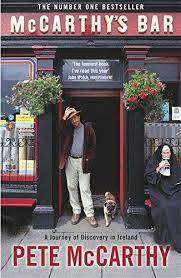 On the Plain of Snakes: A Mexican Road Trip
Paul Theroux
€13.40

365 Ways to Go Wild: Embrace Your Inner Adventurer Every Day of the Year
Sam Lacey
€8.50

One More Croissant for the Road
Felicity Cloake
€12.20

Outpost: A Journey to the Wild Ends of the Earth
Dan Richards
€12.05

Notes from an Apocalypse
Mark O'Connell
€12.20

Reference World Atlas: An Encyclopedia in an Atlas
DK
€36.60