*Pre-Order the debut crime novel from Frankie Boyle* 'A darkest noir, unputdownable crime novel that swerves and surprises, with a gut-punch ending. I loved it!' Denise Mina, author of The Long Drop 'Reads like a twisted Caledonian take on Robert Altman's The Long Goodbye. Inherent vices and scalpel-sharp jokes vie with a very human concern for those least garlanded in the rat race of life' Ian Rankin It's 2015 in Glasgow, a few months after the Independence Referendum. When Valium addict Felix McAveety's best friend Marina is found murdered in the local park, he goes looking for answers to questions that he quickly forgets. In a haze of uppers, hallucinogens, and diazepam, Felix enlists the help of a brilliant but mercurial GP; a bright young trade unionist; a flailing screenwriter; semi-celebrity crime novelist Jane Pickford; and his crisis fuelled downstairs neighbour Donnie. Their investigation takes them on a bewildering expedition that takes in Scottish radical politics, Artificial Intelligence, cults, secret agents, smugglers, and vegan record shops. Meantime is a picaresque detective story set against the backdrop of post-referendum Scotland. Frankie Boyle's debut novel is a tale of murder and revenge, and of personal and political loss. 'A surprisingly moving and beautiful journey through one man's shitshow of a friend's death / hangover' Lucy Prebble, executive producer and writer of Succession 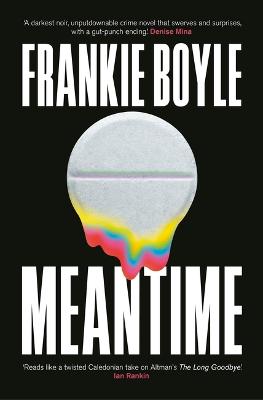