60+ recipes culled from today's modern classics with entertaining backstories from the cocktail revival of the past thirty years, by a two-time James Beard Awardnominated author and New York Times cocktail and spirits writer.

One of the greatest dividends of the revival in cocktail culture that began in the 1990s has been the relentless innovation. More new cocktailsand good oneshave been invented in the past thirty years than during any period since the first golden age of cocktails, which lasted from roughly the 1870s until the arrival of Prohibition in 1920 and included the birth of the Martini, Manhattan, Daiquiri, and Tom Collins.

Just as that first bar-world zenith produced a half-century of classic recipes before Prohibition, the eruption of talent over the past three decades has handily delivered its share of drinks that have found favor with arbiters on both sides of the bar. Among them are the Espresso Martini, White Negroni, Death Flip, Old Cuban, Paper Plane, Siesta, and many more, all included here along with each drink's recipe origin story.

This book includes more than sixty easy-to-make drinks that all earned their stripes as modern classics years ago. Sprinkled among them are also a handful of critics' choices, potential classics that have the goods to become popular go-to cocktails in the future. 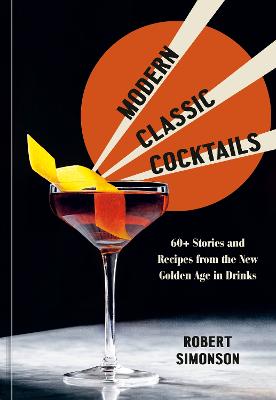 Beer A Tasting Course: A Flavour-Focused Approach to the World of Beer
Mark Dredge
Hardback
€24.99

Wine Uncorked: My guide to the world of wine
Fred Sirieix
Hardback
€21.25

Cosmic Cocktails: A Guide to the Mixology of Astrology
Lydia Levine
Paperback
€9.99

Vodka Made Me Do It: 60 Vibrant and Versatile Vodka Cocktails
Colleen Graham
Hardback
€12.50

How to make the best coffee
James Hoffmann
Hardback
€21.25

The Little Book of Prosecco and Sparkling Cocktails
Pyramid
Hardback
€11.25