THE SENSATIONAL NEW PSYCHOLOGICAL THRILLER FROM THE INTERNATIONALLY BESTSELLING AUTHOR OF THE GIRL BEFORE Pete Riley answers the door one morning to a parent's worst nightmare. On his doorstep is a stranger, Miles Lambert, who breaks the devastating news that Pete's two-year-old, Theo, isn't his biological child after all - he is Miles's, switched with the Lamberts' baby at birth by an understaffed hospital. Reeling from shock, Peter and his partner Maddie agree that, rather than swap the children back, it's better to stay as they are but to involve the other family in their children's lives. But a plan to sue the hospital triggers an official investigation that unearths some disturbing questions about just what happened on the day the babies were switched. And when Theo is thrown out of nursery for hitting other children, Maddie and Pete have to ask themselves: how far do they want this arrangement to go? What are the secrets hidden behind the Lamberts' smart front door? And how much can they trust the real parents of their child - or even each other? An addictive psychological thriller, perfect for fans of The Silent Patient and Shari Lapena's The Couple Next Door. See what everyone is saying about JP Delaney, the hottest name in psychological thrillers: 'DAZZLING' - Lee Child 'ADDICTIVE' - Daily Express 'DEVASTATING' - Daily Mail 'INGENIOUS' - New York Times 'COMPULSIVE' - Glamour Magazine 'ELEGANT' - Peter James 'SEXY' - Mail on Sunday 'ENTHRALLING' - Woman and Home 'ORIGINAL' - The Times 'RIVETING' - Lisa Gardner 'CREEPY' - Heat 'SATISFYING' - Reader's Digest 'SUPERIOR' - The Bookseller 'MORE THAN A MATCH FOR PAULA HAWKINS' - Sunday Times 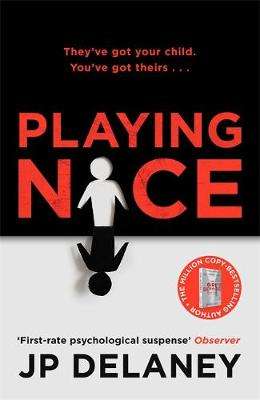