On Tuesdays I'm a Buddhist

'Searingly honest, funny, self-deprecating, Harding's narrative seems to rest on the pulse of Ireland' Irish Times One day in the summer of 2016, Michael Harding's wife brought an unusual gift home from Warsaw. All of a sudden, he found himself falling back into the old religious devotions of an earlier time. The meaning he had found through years of engagement with therapy began to dissolve. Here, in On Tuesdays I'm a Buddhist, Harding examines the search for meaning in life which keeps him fastened to the idea of god. After many therapy sessions focused on an effort to uncover personal truth, and long solitary months on the road with a one man show, Harding is finally led to an artists' retreat in the shadow of Skellig Michael. Mixing stories from the road with dispatches from his Irish Times columns, On Tuesdays I'm a Buddhist is a spell-binding and powerful book about the human condition, the narratives we weave around the self, and the ultimate bliss of living in the present moment. 'What happens between one story and the next? That's the really interesting part. That's the space where we find bliss; where we float sometimes, suspended, and only for a brief moment. Perhaps only for a few scarce moments in an entire life.' 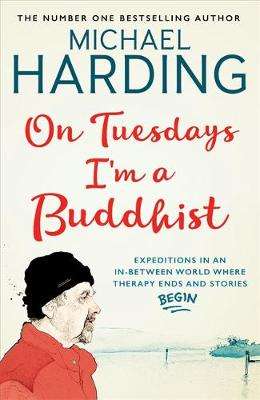 Paperback
On Tuesdays I'm a Buddhist also appears in these Categories: