John Hume: In His Own Words

John Hume is regarded as the key architect of the Belfast/Good Friday Agreement. This book collects extracts from Hume's speeches, articles and interviews, and adds a contexual narrative. The selected texts chronicle his entire career, covering his entry into public life in the early 1960s through the credit union, the Derry Housing Association and the civil rights movement, his first election to the Northern Ireland parliament, the foundation of the SDLP, his influence over successive Irish governments, and the various initiatives aimed at ending the violence and achieving an acceptable agreement.

This book provides a comprehensive overview of Hume's political thoughts, his comments on critical events and developments, and his proposals for resolving the Northern Irish conflict. Hume's commitment to human rights, and his implacable opposition to violence as a means of addressing conflict emerge from the texts, as does his transformative influence on the development of Irish and British attitudes and policies, as governments grappled with the problems arising from the troubled relationships within and between the two islands. 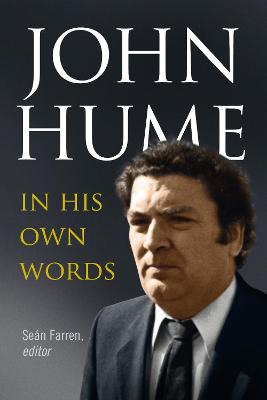 Paperback
John Hume: In His Own Words also appears in these Categories:

100 Animals That Can F*cking End You
Mamadou Ndiaye
Hardback
€21.25

The Japanese: A History in Twenty Lives
Christopher Harding
Paperback
€16.25