Thatcher's Spy: My Life as an MI5 Agent Inside Sinn Fein

Early one morning in March 1985, as he climbed the six steps of Margaret Thatchers prime-ministerial jet on the runway of RAF Aldergrove, little did Willie Carlin know the role Freddie Scappaticci played in saving his life.

So began the dramatic extraction of Margaret Thatchers key undercover agent in Sinn Féin  Willie Carlin, aka Agent 3007. For 11 years the former British soldier worked alongside former IRA commander Martin McGuinness in the republican movements political wing in Derry. He was MI5s man at McGuinness side and gave the British State unprecedented insight into the IRA leaders strategic thinking. Carlin worked with McGuinness to develop Sinn Féins election strategy after the 1981 hunger strike, and the MI5 and later FRU agents reports on McGuinness, Adams and other republicans were read by the British Cabinet, including Margaret Thatcher herself.

When Carlins cover was blown in mid-1985 thanks to one of his old MI5 handlers being jailed as a Soviet spy, Thatcher authorised the use of her jet to whisk him to safety. Incredibly, it was another British super spy inside the IRAs secretive counter-intelligence unit, the nuttin squad, who saved Carlins life. The Derry man is perhaps the only person alive thanks to the information provided by the jewel in the crown of British military intelligence  Freddie Scappaticci, aka Stakeknife.

In Thatchers Spy, the Cold War meets Northern Irelands Dirty War in the remarkable real-life story of a deep under-cover British intelligence agent, a man now doomed forever to look over his shoulder. . . 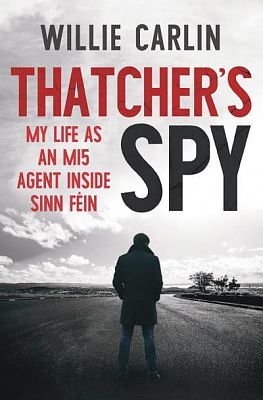 Paperback
Thatcher's Spy: My Life as an MI5 Agent Inside Sinn Fein also appears in these Categories:

20% off
The Opposite of Butterfly Hunting
Evanna Lynch
Trade Paperback
€14.99

8% off
A Poet in the House: Patrick Kavanagh at Priory Grove
Elizabeth O'Toole
Paperback
€15.00

20% off
In Kiltumper A Year in an Irish Garden
Niall Williams & Christine Breen
Hardback
€18.99

Psychiatrist in the Chair: The Official Biography of Anthony Clare
Muiris Houston
Paperback
€16.95