The Future Years: A Story of Analog Devices' Start-up in Limerick

45 years ago Analog Devices began operations in a small factory bay in Raheen in Limerick with an initial start-up team of 13 people- among them, author of The Future Years, Pat Cunneen.
In 1976, despite the reservations of some corporate board members, Analog Devices established Irelands first high-tech wafer fabrication (silicon chip) and new product design facility in Ireland. Concerns were expressed at the time that Ireland did not yet have the expertise or the infrastructure to build and operate a technology that was still in its relative infancy even inside Silicon Valley.
Fast-forwarding to today, 45 years later, the Analog Devices campus in Limerick employs over 1,200 scientists, engineers, production and support staff in one of the most technologically advanced facilities in the country. In his Afterword for this book, Analog co-founder Ray Stata reflects that the Analog Limerick story vividly illustrates what is possible against all odds.
With its consistently high levels of added-value employment, investment and growth, Analog has been hugely important to the economy of Limerick. In turn, the Limerick campus has been the source of extraordinary talent and has been described as a jewel in the crown of the IDA as it regularly showcases the Limerick facility with its leading-edge technologies and advanced manufacturing processes.

Author Pat Cunneen explains, The Future Years covers the first dozen or so years of the start-up of the Irish division. It is told to record and celebrate the success of all the people who worked in Analog over those early years, including those that we have sadly lost along the way. The story touches on the local industrial context of the time, the technology and operational successes and challenges, as well as the vibrant sports and social environment but mostly, it is a story about people.

Author royalties will be donated to Milford Care Centre, Limerick. 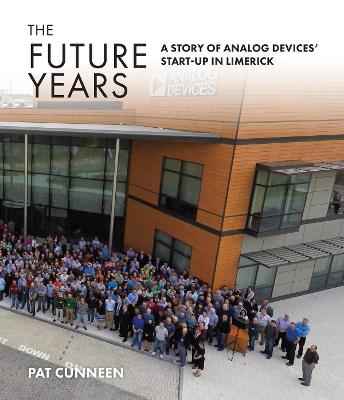 20% offHardback
The Future Years: A Story of Analog Devices' Start-up in Limerick also appears in these Categories:

20% off
The Poster and Other Stories
O'Shaughnessy
Trade Paperback
€14.40

20% off
The A-Z Of Curious County Limerick
Sharon Slater
Paperback
€11.99

20% off
Once Upon a Road: The History and Times of an Irish Butter Road
Joe Harrington
Paperback
€19.99

20% off
The Other Clare Vol 46
Shannon Archeaological & Historical Soci
Paperback
€8.00

20% off
Story of Clare and its People
Matthew Potter
Paperback
€20.00

What Do We Know and What Should We Do About the Irish Border?
Katy Hayward
Paperback
€12.35

Down to Earth: Politics in the New Climatic Regime
Bruno Latour
Paperback
€15.95

Lobbying: The Dark Side of Politics
Wyn Grant
Paperback
€12.05

20% off
On Tyranny: Twenty Lessons from the Twentieth Century
Timothy Snyder
Trade Paperback
€10.00

The Pursuit of History: Aims, Methods and New Directions in the Study of History
John Tosh
Paperback
€31.30