Secrets and illusions abound as a group of young magicians competes for the prize of a lifetime in this gripping adventure, the first in an enthralling new series from debut author Justyn Edwards. "Magic is about dreaming what is impossible and making it possible. It's the innocent young mind in all of us that loves it. We want to be filled with wonder. We want to believe. I want the winner of this competition and the recipient of my legacy to dare to dream big. So, let The Great Fox Hunt begin." Thirteen-year-old Flick Lions has won a place on a new television show, in which young people compete to win the legacy of the Great Fox, one of the world's most famous magicians. But Flick isn't interested in uncovering the Great Fox's tired old magic tricks - she's after something much more important. The magician destroyed her family, and this is Flick's only chance to put things right. Inside the Fox's house is a secret that will change the world of magic for ever, and Flick will go to any lengths to find it. "A delightfully tricky tale of magic and misdirection. A page-turner that's also great fun to read." M. G. Leonard, author of Beetle Boy "A glittering tale of magic and mystery, trust and tricks, friendship and family. Let Justyn Edwards take you behind the scenes of a world of magic and illusion, on a mind-bending adventure to find the truth." Thomas Taylor, author of Malamander 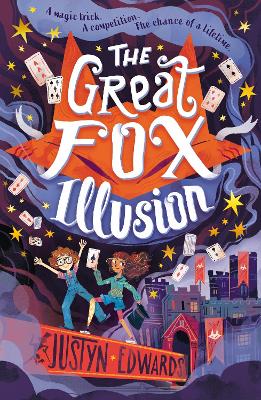 10% offPaperback
The Great Fox Illusion also appears in these Categories: