In 1987, when Richard Harris - the legendary star of This Sporting Life, The Field and Harry Potter and the Philosopher's Stone - was interviewed for the first time by Joe Jackson, they almost came to blows. Jackson was determined to unearth deeper truths about the actor than he usually disclosed during interviews. Harris had manipulated the media all his life , largely to keep people from getting to really know him.

However, by the time that interview ended, they had become firm friends . It was only then that Jackson told Harris, I want to show the public that there is far more to you than your superficial image as a boozing brawling womaniser. Harris loved the idea and two years later he asked Jackson to write his biography. Richard Harris: Raising Hell and Reaching for Heaven is that biography. But it is much more besides.

Based on a searingly on a series of interviews Jackson recorded with Harris between 1987 and 2001, plus the authors journal entries and extensive notes, this book is also a part -memoir that turns a highly personal and moving back story about why it was inevitable that Jackson and Harris would connect at the deepest possible level. This book will finally prove beyond a doubt that there was far more to Richard Harris, indisputably one of Irelands greatest actors, as well as a Grammy-award winning recording artist and a published poet, than has ever been revealed. 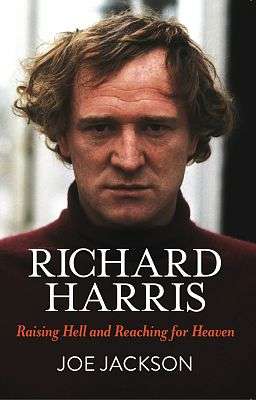 20% off
An Irish Atlantic Rainforest: A Personal Journey into the Magic of Rewilding
Eoghan Daltun
€16.99

15% off
The Ship Beneath the Ice: The Discovery of Shackleton's Endurance
Mensun Bound
Paperback
€17.99